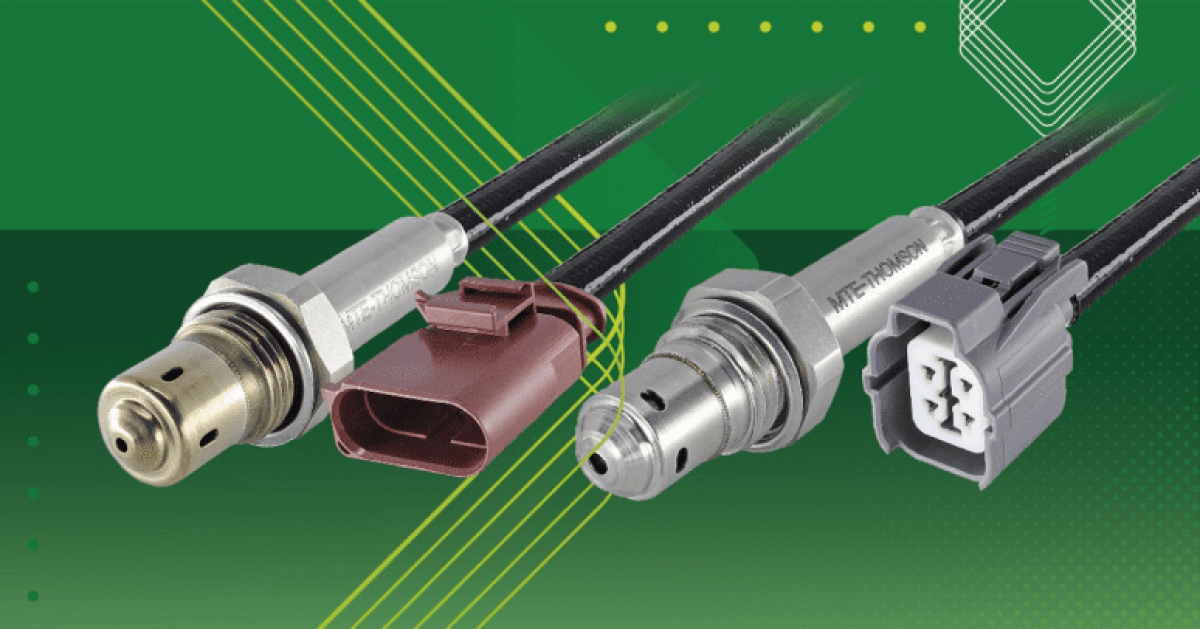 What is a Lambda Probe or Oxygen Sensor?

The Lambda Probe, also known as Oxygen Sensor is located in the vehicle exhaust and its main function is to analyze the amount of oxygen present in the gases released by the engine.

What is the Lambda Probe or Oxygen Sensor for?

This sensor is for collecting fuel burn information and sending it to the engine ECM. 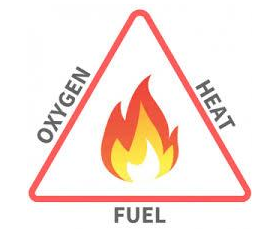 Internal combustion engines (Otto Cycle, Diesel or CNG) can only get function if there are oxygen, fuel, and heat (combustion or burning is an exothermic reaction, i.e. it occurs from the inside out). Without these elements, it is not possible to obtain the internal explosion necessary for their operation.

But the big challenge is getting the balance between fuel and oxidizer, in this case, oxygen called the stoichiometric mixture (Pic.02), where the Oxygen Sensor unfolds its function, presenting how much unburned oxygen is in the exhaust resulted from the engine combustion. If the mixture is lean (more oxygen) or rich (less oxygen), the sensor sends an electrical signal (Millivolts) to the Electronic Injection Management Unit (ECU or ECM). Based on the information received from the sensor, the ECU will regulate the fuel mixture, injecting more or less fuel into the combustion chamber, so you can have better engine performance, fuel economy, and lower emissions. 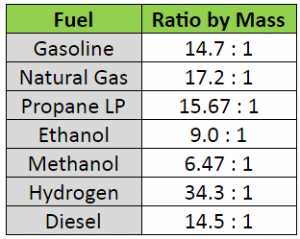 Example:  Gasoline: To burn completely we need 14.7 parts of Air, for 1 (one) part of FUEL. This ratio must be changed according to different conditions, whether environmental, temperature, pressure, humidity, the vehicle’s own operation, RPM, engine temperature, desired power variation, among others.

The correct and comprehensive name for all types of this product is OXYGEN SENSOR. It measures exactly Oxygen (O2) present in combustion, independent of which fuel is used.

When the mixture is rich (too much fuel), the generated voltage by the sensor is high (900 millivolts), at this moment the ECU stops to inject fuel and the mixture becomes lean (too much oxygen). Then the sensor informs the ECU with a low voltage (50 millivolts) and, at this moment the ECU injects more fuel in the mixture. This transition between rich and lean resembles the Greek letter Lambda (λ).

See on the graph below, the reason why this name was adopted to the sensor. 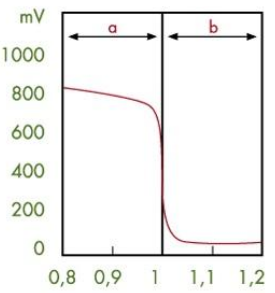 What is Lambda Factor?

The letter Lambda was also used to define the Lambda factor (λ) which corresponds to the equivalence ratio in the actual air-fuel ratio (which is happening in the vehicle at that time) between the ideal or stoichiometric ratio for a mixture. 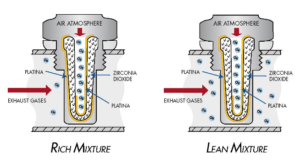 How Does Oxygen Sensor Work?

What is the Oxygen Sensor made of?

The Oxygen Sensor is composed of an internal ceramic material called Zirconium Dioxide with a porous platinum coating and is protected by a metal casing. Its performance is based on changing the properties of ceramics at high temperatures allowing the diffusion of oxygen from the air. 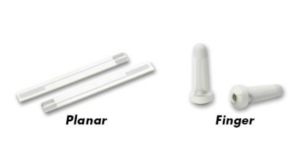 It operates according to the difference in oxygen concentration between the exhaust gas and outside air, generating a voltage of 50 mV to 900 mV.

Older probes were only heated by the exhaust gases, so it was necessary to wait several minutes before the sensor could be work properly. Currently, Oxygen Sensor has heating resistors that allow heating up to 10 seconds the sensor, even when the exhaust gases are at a low temperature.

How many Oxygen Sensors does the vehicle have?

What types of oxygen sensors are found in vehicles?

They are available in 1,2,3 or 4 wires depending on the construction project. Due to the environment legislations, newer vehicles only use oxygen sensors with internal heater, commonly found in 4-wire sensors, Thimble type with heater starts to work in approximately 40 seconds after ignition.

It has a new design that promotes faster heating of the probe, it is only offered in with 4 wire and, starts to work after 15 seconds. Beginning the monitoring much faster than the thimble type.

Known as the A/F Sensor(Air-Fuel Ratio Sensor), this sensor technology delivers more accurate measure, seeking for the optimal fuel mixture. It can monitor how rich or lean the mixture is, distinct from thimble and Planar. Most used in Asian cars like Honda, Nissan, and Toyota.

Like the A / F Sensor, it can monitor the optimum mixing condition according to the vehicle condition. 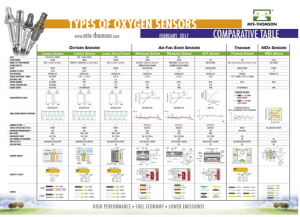 How Does  Wideband Sensor Work?

The Air-Fuel ratio sensor, also known as WideBand Sensor, was designed to provide a linear output signal for vehicles that should fit into the EURO 3 standard.

This sensor allows more precise and gradual mixture control and has a faster response.

See its characteristic curve versus the normal Oxygen Sensor: 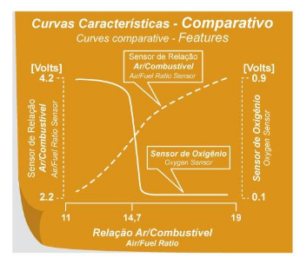 The Air/Fuel Sensor, when above 650°C (1200°F), is a voltage generator as well, but almost linear for mixtures with lambda factor between 0.75V and 1.5V. It means its response is proportional to the oxygen concentration.
The Air-Fuel ratio sensors are manufactured in three different configurations:
1. With 5 wires, 2 cells, and a CLOSED diffusion chamber.
2. With 5 wires, 2 cells, and an OPENED diffusion chamber.
3. With 4 wires and only one cell.

Before continuing, let’s know about the Nernst cell, the main component of the Lambda Sensor: 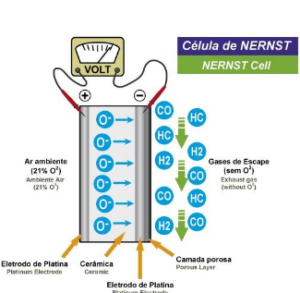 Zirconia ceramic element allows the passage of oxygen ions from one side to another. On one side there is atmospheric air with 21% oxygen and on the opposite side the exhaust
gases with few or no oxygen. This movement of ions generates a voltage of up to 1 Volt.

The Air-Fuel Sensor uses two Nernst cells: one as a measuring cell and another as oxygen injection (Oxygen Pump). It is assumed that if the oxygen concentration difference generates voltage, so, when a voltage is applied, it generates an ion-flow, i.e an ionic current. 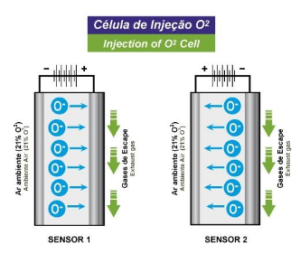 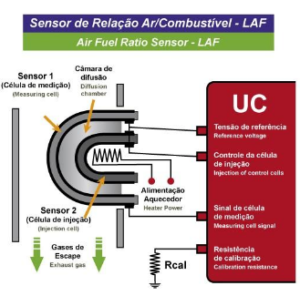 With two cells and a closed diffusion chamber, the ECU (electronic control unit) controls the voltage applied to the Injection Cell (2) in order to keep the signal of the measuring cell (1) always
at 0.45V. the voltage applied in Cell 2 ranges between 1.7V for rich mixtures and 3.3V for lean mixtures.

Let`s explain an example of a rich mixture in the exhaust. The diffusion chamber becomes slightly rich, It generates a voltage increase in the measuring cell.

In the ECU there is a circuit that compares this voltage with a 0.45V reference. It generates a negative voltage in order to inject oxygen. As no oxygen is present in the rich exhaust gases, it is generated by an electrochemical reaction taking place on the thin layer of the platinum electrode (exhaust side), which split the oxygen-ions from carbon monoxide and water present in the exhaust gases.

This oxygen is injected into the Diffusion Chamber until a stoichiometric condition is established. When the mixture has λ=1, the injection current is null. When there is a lean mixture, the circuit generates a positive current and removes oxygen from the diffusion chamber. 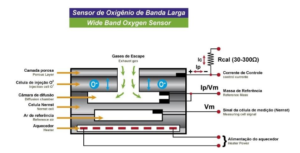 With only one cell it is known as A/F Sensor. Here the sensor has only one Nernst Cell with an atmospheric air reference cavity, very similar to the Lambda Sensor. The difference is that there is a special Diffusion Chamber, which limits the ion-flow of oxygen when a voltage is applied between the electrodes. 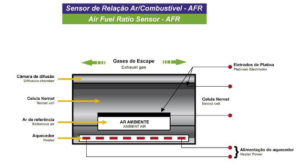 It works as follows

The ECU applies 3.3V to the internal electrode and 3V to the external electrode, so there is between them a difference of electrical potential of 300mV, which slightly forces an oxygen-ion injection from the exhaust gases side into the air reference chamber.

When the gases are at a very rich mixture (A/F < 14.7), i.e., with no oxygen, the Nernst Cell feels the high difference of Oxygen concentration and generates a maximum voltage between the electrodes, as it injects oxygen from the reference chamber out to the exhaust gases side. This movement of ions is opposite to that forced by the 300mV, this means that there is a negative current between the electrodes, so that the reference voltage at the ECU drops below the 3.3V.

In the opposite case, when the exhaust mixture is too lean (A/F > 14.7), there is an excess of oxygen on the external side, which is in favor of the 300mV forced injection, facilitating the oxygen-ion flow and generating a positive current. The reference voltage in the ECU rises above the 3.3V.

When the gases are at stoichiometric equilibrium, the 300mV forced injection cancels the flow generated by the Nernst Cell and there is no ion-flow, so there is no electrical current. The reference voltage stays at 3.3V

Is the oxygen sensor good or bad?